8vo. 55, (1) pp. With woodcut printer's device on title page (Christ sending the Apostles forth to spread the Gospel). Unbound as issued.

Very scarce catalogue of oriental books printed by the Propaganda Fide press. Pages 10-12 list no fewer than 28 publications in Arabic, many of which (such as Scialac's and Sionita's 1613 version of the "Doctrica Christiana") are still considered milestones of Arabic typography. Prints in other languages such as Chaldaean, Persian, Syriac, and Ottoman Turkish bear further witness to the unrivalled excellence of the Propaganda Press in the field of Middle Eastern typography. A first such catalogue had appeared in 1765; of this second, expanded edition OCLC lists no more than two copies (Tübingen and Copenhagen). 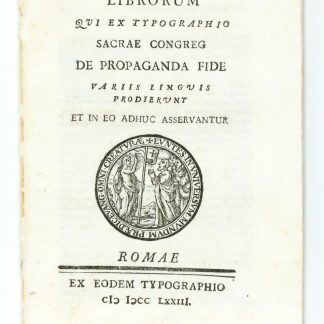