8vo. 32 ff., including 15 pp. of poems and 32 pp. with 39 entries and 1 p. with contemporary contemplative entries by three writers. Contemporary limp vellum, using an old manuscript.

All the entries in this early 17th century friendship album, which is also notable for its unusual format and binding, date from Zumler's sojourn at the Royal School of St Afra in Meissen in Saxony, where he was educated from September 1598 to August 1604. Hence, this is also an early and unusual example of a public school friendship album, rather than than of a university student. Apart from a number of later clerics - including an early relation of Georg Agricola - most contributors are boys or teachers who later achieved some renown as scholars, such as the humanist Gallus von Racknitz. The entries are prefixed by 15 handwritten pages of Latin poems, all copied from the works of Georg Fabricius (1516-71), who had been director of the St Afra's in 1546.

7) Bartolomäus Sättler (dates unknown), a son of Jacob Sättler (1540-1619), clergyman at St Nikolai in Freiberg. Jacob was a son of the cloth-maker Ambrosius Sättler and Anna Bauer, sister of the outstanding scholar and scientist Georg Agricola (1494-1555), hailed as the "father of mineralogy". 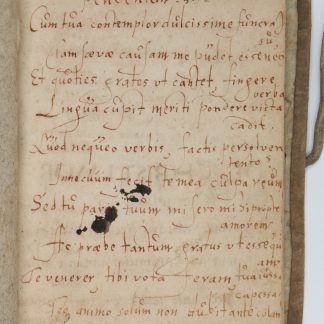