[Lienz in East Tyrol]. Accounting booklet of St. Michael am Rindermarkt in Lienz.

A unique testimony of late medieval building, significant for questions of art history as well as economic and social history. On the one hand, the manuscript proves useful for dating the construction works at St. Michael and provides important information about the persons in charge, being, apart from inscriptions in some of his sacral buildings, the only known written source naming the builder Bartlmä Firtaler. On the other hand, it allows a profound insight into the organisation of a late medieval construction site. While other manuscripts document the building of cathedrals or urban edifices, the one at hand lists the expenses of a small site in the periphery, covering about two months. The booklet was probably composed after the work was completed, drawing from notes constantly taken during the building process. It is arranged in several chapters, stating the weekly expenses for bricklayers and carpenters, for day works, the acquisition and transportation of stones, as well as other more general expenditures (such as the purchase of wood, nails, chains, saws etc.). Expenses for sealing by the town judge, for an errand and for the workmen's wine supply complete the picture.

Bartlmä Firtaler, born aound 1480, built many sacral edifices in Carinthia, Tyrol and Carniola/Slovenia, his debut work being the chapel in Schloss Stein near Oberdrauburg in 1505. The lord of the castle, Lukas von Graben, who also appears in the manuscript, probably acted as the principal and financier of St. Michael, which was to become the future burial place of the lords of Graben. The booklet records the offer of 22 guilders to Firtaler, which he didn't accept ("damit hat er aber nit besteen mügen"), leading to a concession of 32 guilders in the end. This episode illustrates Firtaler's esteem as a builder, as well as his self-confidence. Previous researchers didn't assign St. Michael in Lienz to Firtaler, or merely accredited him works in the nave, dating them around 1530, when he might have already been deceased. The accounting booklet proves the church to be a product of Firtaler's first style period, which might have been inspired by Benedikt Ried's work in the Vladislav Hall in Prague Castle.

The expenses were listed by an unknown scribe, giving the total at the end of each page. The grand total of 83 guilders is given at the end of the booklet (a miscalculation, as the total reached by adding the sums of each page amounts to 84). However, not only financial but also social circumstances connected with the Lienz building site can be reconstructed. The scribe distinguishes between masters and assistants, who are mentioned by name, and unskilled workers, whose names aren't given. Personal names also appear in the expenses for the transportation of stones to Lienz, as well as in the general expenses, indicating sellers and handymen. These names could be a basis for further research, not only defining the roles of the historical players involved in the building of St. Michael in the whole of the city's history, but also placing the accounting booklet in a prominent position compliant with its historical relevance. 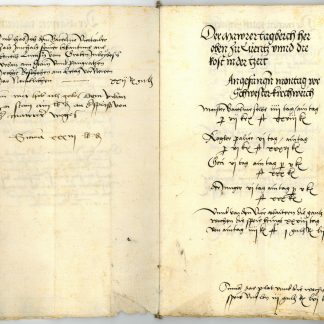