Signed by the composer

Termed the "original first edition" by Hoboken. A secular cantata composed around 1789, the first edition proper was published by Artaria in 1790. The publisher Bland had visited Haydn at Eszterháza; he was instrumental in bringing Haydn to London and provided his first lodging there in January 1791. "Arianna" was performed in London in February by the soprano castrato Gasparo Pacchierotti, with Haydn accompanying on the harpsichord: "On 18 February [1791] Haydn made his first appearance in a concert in which he accompanied his cantata 'Ariana a Naxos' on the pianoforte. The success was such that the cantata's performance needed to be repeated a few days later" (cf. Huss, p. 146f.). Haydn later would regarded the two periods he spent in the British capital (1791-92 and 1794-95) as the happiest of his life. 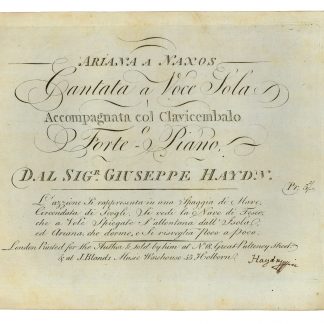