A photograph album comprising 167 images of the life of a German merchant family in China around the turn of the century. Includes several views of the interior of the Schröders' art-deco residence in Shanghai and of their Chinese domestic workers dressed in late Qing costumes with house puppies and pet monkey, with several portraits of Schröder's wife, showing her feeding the chicken in the courtyard or seated on a horse carriage in the streets of Shanghai, many photographs were taken during the Schröder family's extensive travels in and around Shanghai, for example along the Huangpu River to the mountain retreat in Moganshan and to Hangzhou, showing not only scenic views but also the life of locals they met en route.

Extremeties somewhat rubbed with slight flaws to silk, but still well preserved. Provenance: From the collection of Johannes Gottfried William Schröder (1870-1942). Born in India, the brother of the German poet Rudolf Alexander Schröder grew up in Bremen, trained as a merchant and visited India, China, Japan, and America. He established his own business in Shanghai in 1906. His intimate knowledge of East Asia led him to embrace the philosophy of anthroposophy. 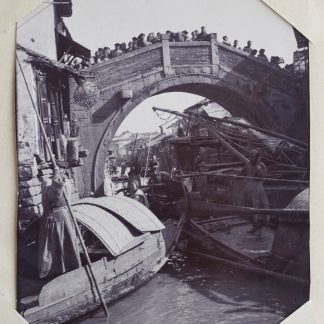