A plain, unpresuming note that probably once accompanied a small hospitality gift, inscribed by one of the most powerful French statesmen of all time to a Founding Father of the United States, reading: "Presented to hon. M. Burr / by M. Talleyrand". The Frenchman's use of English appears to be a polite signal of deference to his American host, for Burr's French undoubtedly would have been more than sufficient to understand the same note in the international language of education and diplomacy, whereas Talleyrand's command of English is largely agreed to have been extremely limited (cf. Earl, p. 290).

Talleyrand's career straddled the Ancien régime, French Revolution and Restoration; he was successively a bishop, a revolutionary who assisted in the drafting of the Declaration of the Rights of Man, an exile in America, and later Foreign Minister to both Napoleon and his successor, the restored Bourbon king, Louis XVIII. Talleyrand had left revolutionary France just before the beginning of the Great Terror on a diplomatic mission to Britain, but earlier French exiles pressured Pitt to expel him to the Republic, where a warrant for his arrest had been issued in the meantime. "A return to France meant certain death, and most of the other countries of Europe were openly hostile to him for the part he had played in the early days of the Revolution. In mid-February, 1794, he booked a passage on the American ship 'William Penn'. He had made up his mind; the United States would be his refuge until such time as France returned to a normal, stable, and reasonable condition" (Earl, p. 282). In America, Talleyrand settled comfortably into the cosmopolitan society of Philadelphia, the federal capital and a haven for Gallic émigrés. Fortified with his reputation as well as with warm letters of recommendation to Washington, Benjamin Rush and the Hamilton family, the French exile found American drawing rooms open to him, and "from his April arrival until his visit to New York in June, 1794, Talleyrand was hardly ever without an invitation to dinner" (Earl, p. 289). One of his famous hosts was Aaron Burr, two years Talleyrand's junior and then serving as U.S. Senator representing New York. At his Richmond Hill estate in Manhattan, which he had purchased in 1794, Burr "maintained a liberal establishment, and exercised the hospitality which was then in vogue. Talleyrand, Volney, Louis Philippe, and other strangers of distinction, whom the French Revolution drove into exile, were [there] entertained with princely profusion and elegance" (Parton I, p. 154). Burr's biographer Parton reports that Talleyrand was among those with whom the Senator "became particularly intimate" (ibid.), and it is possible that Burr, who like Talleyrand had forsaken theology for politics, sensed in his guest a kindred instinct for nimbly "doubling one's choices" in that ever-shifting world. Indeed, Alexander Hamilton's biographer Chernow describes Burr as an "agile opportunist", a "chameleon who evaded clear-cut positions on most issues and was a genius at studied ambiguity" - a portrait recreated in the words put into his mouth by a recent broadway hit: "Talk less, smile more - don't let them know what you're against or what you're for." The loose friendship between the two statesmen, both notorious womanizers, lasted throughout the Frenchman's American exile: as late as 1796, Parton writes, Talleyrand was among the notabilities invited to a dinner party which Burr gave at his Philadelphia residence for the Mohawk chief Joseph Brant (cf. p. 204).

When the political climate in France changed after the fall of Robespierre and the threat of the guillotine receded, Talleyrand petitioned to the National Convention for permission to return. The intercessions of Madame de Stael and other friends proved successful. "On June 3, 1796, Talleyrand paid a visit to the French Minister to the United States, Pierre Auguste Adet, and received his passport. The last barrier had been hurdled" (Earl, p. 297). On 13 June, Talleyrand left Burr and the United States behind him, sailing back to Europe and an extraordinary career on the Danish vessel "Den Nye Prove" - "The New Enterprise". His host Burr would go on to serve as third U.S. Vice President, though his political career was to be ruined when he famously shot Alexander Hamilton in a duel, eight years hence. When the tables were turned and Burr himself was an exile in France in 1810, the affair proved to have frustrated his hopes of gaining access to Napoleon through his old acquaintance, who had also been a friend of his opponent's: "when Burr requested an interview, Talleyrand rebuffed him with a haughty note: 'General Hamilton's likeness always hangs over my mantle'" (Merrill/Endicott, p. 32).

A slight waterstain. Removed from an old collection; mounted on backing paper with the collector's bio-bibliographical annotation "Galerie hist[orique] des contemp[orains] VIII. 319b" (referencing the 8th volume of the said work, published in 1820). 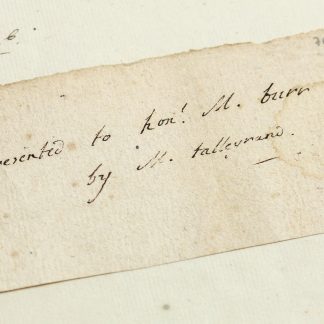