From Hamburg's waterfront dives to the gold fields of Alaska and the New York Underworld: "In Search of Lost Fortune"

An extensive manuscript, and the only known surviving fragment, of the memoirs of Adolf Skopinski, a German native who in 1900 emigrated from Hamburg's waterfront district of St. Pauli to seek his fortune in America. He was naturalized a U.S. citizen in 1901. As a prospector in Alaska he witnessed the Fairbanks Gold Rush from 1902 to 1911, staying at Iditarod, then one of the country's most populous places and an important river port and transport hub (today a ghost town). In 1910 Skopinski was even granted a patent for a "means for automatically dumping excavating-scrapers" (US960590A). After the First World War, Skopinski returned to Germany and tried without success to have his memoirs published by the journalist Alfred E. Johann.

The present part of his manuscript focuses on Skopinski's arrival in New York, where he meets Horn, a Rhenish wrestler who performs as a strongman and "tooth athlete" (p. 9), and his friend Babette, "a good-looking, strapping, robustly built Bavarian girl with sparkling eyes, formerly a cook", with whom he trains as a wrestler to perform as the main act. Through the intermediation of another German emigré, a former estate manager who had left the country after "running into difficulties" (p. 18), he soon finds another position as bouncer for a cabaret in 14th Street - "New York's main thoroughfare, where all the better cabarets, ballets, cafés and restaurants are located, where the demi-monde and underworld meet [...] The ladies who sell their love for gold; the waiters who are in fact lapsed barons or dishonourably discharged officers" (p. 14). Skopinski sours on the job after he is mixed up in a knife-fight with a drunk Italian (p. 19) and assumes a new position as bartender in Staten Island (p. 20), then another as boat-keeper and domestic servant at a Hoboken hotel (pp. 21 ff.), before ending up back at his old New York lodgings, where is is advised to "go into ironworks and build skyscrapers, which were then rising everywhere" (p. 31): "And something would happen every day: a finger, hand, arm or leg squashed; twice a week someone would take the tumble - mostly Irishmen who had imbibed liquid courage and so fell from above" (p. 32).

Skopinski witnesses at first hand the founding of the Ironworkers Union, and also the savage wars waged between the construction companies' hired thugs and the union members (pp. 35 ff.); he barely escapes an attempt on his own life ("I suspected an Irishman", p. 38). After this experience Skopinski plans to escape to Honduras or Venezuela, but after stops in Philadelphia and Baltimore he decides to hobo his way across the country. Via Charleston, West Virginia, he reaches Richmond, Virginia (p. [52]), where he finds work at a brewery (pp. 67 ff.), escapes the lewd advances of a priest (pp. 81 f.), and has an affair with a married woman. When she threatens to leave her husband and children for him, Skopinski bolts: via Raleigh, North Carolina, and Savannah, Georgia, he flees to La Guaira in Venezuela, which ends the present chapter of the manuscript.

A few dampstains to the upper quarter of the first few leaves, otherwise fine. Includes a postcard hand-drawn on tree bark, showing Skopinski as a prospector, as well as a portrait photograph of him in his later years. A fascinating survival. 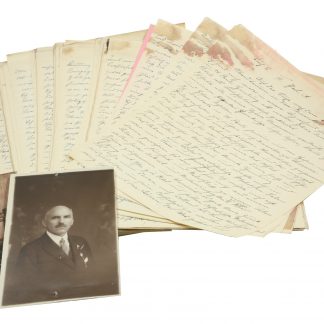