Unique, deluxe copy of the first and most influential translation of 'Das Kapital'

First edition, first issue in Russian, the first translation of "Das Kapital" into any language: a truly magnificent copy of an otherwise unknown deluxe edition printed on special, very heavy paper, making it about 30% thicker than the usual first edition copies.

Although Marx's other works were banned in Russia, the Tsarist censors passed "Das Kapital" as harmless on account of its length and complexity, and the book - rather unexpectedly - became an immediate success with the Russian intelligentsia in search of a theoretical model for industrializing their economically backward country. The press-run of 3000 copies was soon exhausted, and the ensuing ban on the book, when the board of censorship realized their error, prohibited the planned second edition (which was subsequently brought out in New York). The appearance on the market of any first edition has therefore become a great rarity. No mention of a deluxe edition is made at all in the vast bibliographical literature on "Das Kapital". While one could only speculate on the reason for preparing such a special edition, its number must have been extremely small, likely limited to no more than a handful of copies for a small, exclusive group - possibly to be sought among the young revolutionary intellectuals who had laboured for years to make possible the Russian translation, which soon was going to have such a profound effect on world history. This is the only such copy we have been able to locate.

A bit of wear to extremities and traces of faint dampstaining to boards. Inner front hinge slightly weak; the first few leaves with faint traces of slight dampstaining. Very light occasional brownspotting, otherwise fresh and crisp. Old Russian newspaper-clippings to endpapers. A uniquely produced specimen of one of the most influential books ever published. 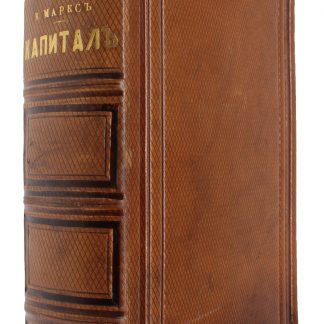