A fine presentation copy of the first edition in French

First edition in French, first issue, a fine presentation copy, inscribed by Marx to the Frankfurt banker Sigmund Schott, with whom Marx exchanged ideas central to his philosophies and work: "Mr Sigmund Schott, de la part l'auteur, Londres, 3 Novembre 1877" to the first engraved title page. Presentation copies of Capital are exceptionally rare, with only seven others having been offered at auction in the last 60 years, just two of those being the first edition in French as here. Sigmund Schott was a German bank director and journalist. He was also a literary critic, bibliophile, and corresponded with the some of the most important intellectual figures of the epoch. In certain editions of Marx's correspondence, Schott was misidentified as the German politician (1818-1895), with whom he shared the same name. As a result, the importance of the relationship between the young banker and the philosopher has perhaps been underexposed. Schott and Marx wrote to one another on a number of occasions over several months, and in the letter that originally accompanied the present volume - and bears the same date as the inscription: 3 November 1877 - Marx details his approach to constructing Capital. "Dear Sir," Marx begins. "My best thanks for the packages. Your offer to arrange for other material to be sent to me from France, Italy, Switzerland, etc. is exceedingly welcome, although I feel reluctant to make undue claims on you. I don't at all mind waiting, by the by, nor will this in any way hold up my work, for I am applying myself to various parts of the book in turn. In fact, privatim, I began by writing Capital in a sequence (starting with the 3rd, historical section) quite the reverse of that in which it was presented to the public, saving only that the first volume - the last I tackled - was got ready for the press straight away, whereas the two others remained in the rough form which all research originally assumes." Marx then goes on to mention the volume now offered: "I enclose a photograph herewith, because the copy of the French edition that goes off to you at the same time as this letter only contains a very far from flattering likeness done from a London photograph by a Parisian artist. Your most obedient Servant, Karl Marx." This letter, so frequently referenced in critical treatments of Capital, not only sheds light on the genesis of one of the most significant philosophical works to emerge in the last two centuries, but also underscores the author's openness and perhaps even his humour. Additionally, it offers an important contextual background for the presentation copy at hand. Given the nature of other examples of correspondence between the two men, it would seem that Schott and Marx regularly exchanged ideas pertaining to banking and social economy. In a letter sent from London, and dated 29 March 1878, Marx wrote to Schott: "I have, though somewhat belatedly, obtained Volume IV (Industrieactien) of the Saling, to which you so kindly drew my attention. I did not wish to reply to your letter until I had at length had time to run through the thing, and have found it very useful… Finally, I have one more thing to ask of you, namely to be so kind, provided it is not too time-consuming, as to let me have a list of the names of Perrot's published writings on the subject of joint-stock companies, etc." Given the tenor of this letter, it would seem that Marx quite relied on Schott for information relating to the financial theories of the day, and that Schott was eager to supply Marx with literature relevant to his work. Le Capital was published in France in 44 "livraisons" between August 1872 and May 1875. Marx began revising Capital for the second German edition in December 1871, which was also the month in which Lachâtre agreed to publish a French edition. In January 1872 Marx recruited Joseph Roy to prepare a French translation and concluded a publishing agreement with Lachâtre. As well as making important revisions for the second German edition, Marx began "to revise, indeed rewrite, the translation" (Draper, p. 174) over the next three years. While the second German edition was published in 1873, Marx continued to exert strict control over the French edition, making additions and corrections to the galley proofs for the parts even as they were being published (Draper, p. 190). He was very clear about its unique value as distinct from the second German edition and strongly advised that even those familiar with the German language editions consult the French edition for further accuracy. For this reason these changes were "taken into account when at length the first English translation, by Samuel Moore and Edward Aveling, appeared in London, in 1887, four years after Marx's death, under the editorship of Engels" (PMM). When the final fascicule was printed in November 1875, the complete set was published in 10,000-11,000 copies. From certain indications found in the correspondence of Marx, it seems likely that the French government, who must have frowned upon the appearance of Das Kapital in French, tried to prevent its publication, which for a certain time was interrupted by the authorities. When the publication was finally completed, rumours abounded that its sale was to be forbidden and the publisher Lachâtre hesitated to sell copies. As noted, any presentation copy of Capital is exceedingly rare.

The volume present here ranks among the finest of these presentation copies. The correspondence surrounding it yields a particularly unique and significant sense of historical context, offering an important point of association related to one of the most significant works on economic philosophy, in the translation which many consider to be the definitive text of Capital as authorised by Marx. 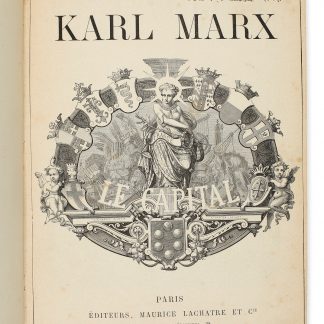