Entirely unknown manuscript of the poem beginning "Soll auch ich den Zauberkelch noch trinken", a fair draft with numerous autograph revisions and corrections. This early version saw at least one more revision, but is complete save for the title "Nika de kai sideron", which probably was not added until the very end. The present manuscript reveals several preliminary stages of the text not carried over into print: in particular, Seume had originally planned to reveal the addressee of this poem of unhappy love in the central stanza: "Aber wenn ich einst mich, Willhelmine, / Deinetwegen meinem Loos versühne"; ultimately, he chose to disclose her name only in the final verse.

The lady in question is the daughter of the Leipzig merchant Christian Friedrich Röder, Wilhelmina (1777-1813), with whom the poet was in love since 1795. "After Seume had been forced by her father to break off the relationship at the turn of the year 1796/97, she married the silk merchant George Henri Favreau in 1798" (cf. Drews/Sangmeister [ed.], Seume Briefe [2002], p. 1195). The published title is taken from the end of the Second Ode of Anacreon, "To Women" ("Nikâ dè kaì síderon, kaì pyr, kalé tis oûsa" - "Even steel is overcome [by beauty, as is fire]"): thus, the former soldier Seume twists the Anacreontic praise of womanhood into a bitter allusion to his own vanquishment by the beautiful woman whom he adores without hope. Seume, a trained classicist, would take a copy of Anacreon along on his famous nine months' walk to Sicily in 1802.

The recto of the first leaf contains the final eight and a half verses of Seume's poem "Jack Rostbeef's Return" (here beginning with: "God bless the blockheads on their way"), showing a similar abundance of revisons. One of the author's few works in English, the poem conveys the perspective of a well-travelled man who has found mankind equally evil and foolish in all quarters of the world and, upon his return, prefers his flawed but familar native country to them all - a notion to which Seume himself may not have been a stranger.

Both poems were published in 1798 the second volume of Seume's "Obolen", but in the reverse order, many pages apart. The present joint manuscript on paper likely acquired in Poland before 1795 suggests that both poems were written quite soon after Seume's separation from Wilhelmina Röder in early 1797.

Two pages show slight loss to individual letters, caused by the leaves having being cut from the gutter of a bound volume. Somewhat wrinkled and browned. Of the utmost rarity. 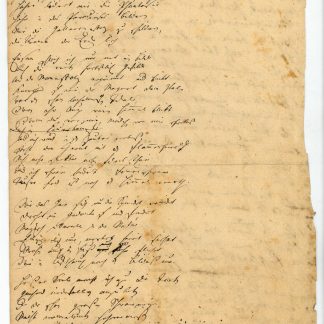