Famous navigational manual, with new views of the principal harbours

Bougard, R. / Serres, John Thomas (ed. and transl.). The little sea torch: or, true guide for coasting pilots: by which they are clearly instructed how to navigate along the coasts of England, Ireland, France, Spain, Portugal, Italy, and Sicily; the isles of Malta, Corsica, Sardinia, and others in the straits; and of the coast of Barbary, from Cape Bon to Cape de Verd. Enriched with upwards of one hundred appearances of head-lands and light-houses. Together with plans of the principal harbours. Also a table of soundings [...].

First English translation of Le Sieur Bougard's famous and oft-printed navigation manual, the "Petit flambeau de la mer", which contains "the minute description of the coasts of the countries and islands indicated by the title" (Phillips). Crucially, this edition boasts a new and original series of illustrations, "beautifully drawn and colored views of the principal headlands, harbors, lighthouses, ports, etc. mentioned in the text" (Phillips), drawn by the English painter John Thomas Serres (1759-1825), who was created Maritime Painter to King George III in 1793. In 1800 Serres became Marine Draughtsman to the Admiralty, and the sketches he made on his ensuing coastal voyages around Britain, France and Spain, and into the Mediterranean, were self-published in the present form, with the consent of the Admiralty (which purchased two copies). "The vast majority of the [...] 170 subscribers were naval officers. This may well be considered to be Serres's most important contribution to the arts of naval victory, both because it was a valuable aid to navigation and because it displays such consummate workmanship" (Tracy). The harbour charts are the work of John Luffman, who was active between 1776 and 1820 as an engraver, publisher, and goldsmith, and the "Naval Chronicle" published quite a few of Luffman's charts. 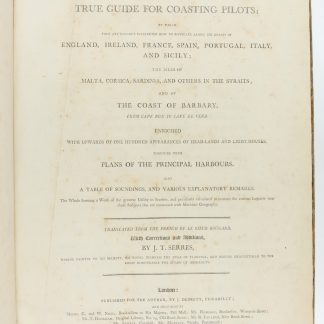