The most detailed and accurate geography of its day

A fine copy of the twelve-volume octavo edition of the most detailed and accurate geography of its day (published simultaneously in four quarto volumes). All the maps are taken from the "Atlas Portatif" (1748-49) of Robert de Vaugondy. The fine map of the Arabian Peninsula is derived, via Vaugondy, from Delisle; "it includes the three classic divisions of the Arabian Peninsula and the following regional subdivisions: Tahama in the south west, Bahrain, which extends along the east coast and includes the town of Cathema, Yemen in the south which includes Oman, the States of the Cherif of Mecca which includes Hagiaz and parts of the centre of the Arabian Peninsula. Although the width of the Red Sea is exaggerated, the Sinai peninsula's shape is very close to reality. The topographical features and watercourses are not very different to how they are shown on other maps of the same period. A town named Naged is shown to the north west of the town of Janama" (Al Ankary). 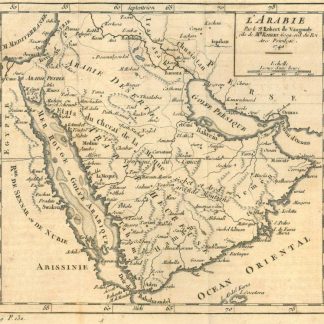