A fine collection of sketch leaves by Carl Artaria, often dashed off on the reverse of old letters or forms, later cut out (likely by a 20th century member of the family) and thus assembled in the present album. Some of the sketches are dated (1827, 1828, 1833, 1836 etc.), others signed with the artist's "CA" monogram. The dominant theme is that of equestrianism and horsemanship (including many drawings of horses without riders, in landscapes or in military contexts, etc.), but there are also occasional hunting scenes, a caricature of a Turk firing a blunderbuss, etc.

Carl Artaria was a son of the long-established art seller and publisher Domenico Artaria from Mainz who in 1793 moved the business premises to Mannheim. Carl took over the company in 1816; it flourished until 1867. In the course of his business, Carl Artaria met many of Germany's great writers and illustrators, including Goethe. "In his youth he created etchings after W. Kobell und Boissieu [...] In his old age he began to draw the beauties of Mannheim's environs in meticulous watercolours" (cf. Thieme/Becker).

Occasional insignificant traces of handling, but in excellent state of preservation. 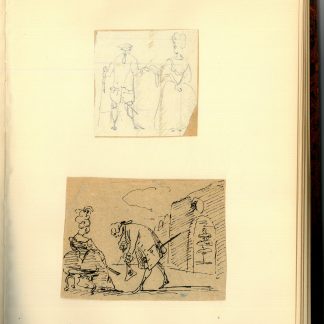