Martin Ziegler, a baker's son (born in Kronstadt [Brasov] in 1660, died in Brenndorf [Bod] in 1716), attended the Kronstadt grammar school before studying at Wittenberg from 1679 onwards. After nearly twelve years abroad he returned home, soon being named director of his old grammar school. He later became a priest at Tartlau but was suspended following a scandal. In 1713 he was elected priest of Brenndorf, but died a few years afterwards. He is remembered as a historian of his native city and of Transylvania (cf. Wurzbach).

Slight browning; occasional offsetting. Complete save for two removed leaves (likely empty, as they have left no trace of offsetting). 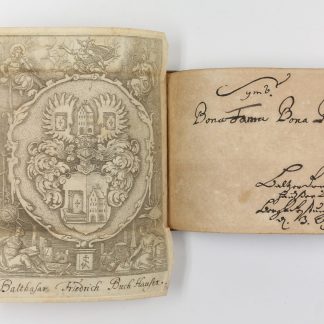