Large 4to. 4 parts in 2 vols., bound in one. 288 pp. 287, (1) pp. Printed in double columns. Contemporary green half calf over marbled boards with giltstamped title to spine.

Third collected edition of a principal journal of the Italian enlightenment, "The Coffeehouse", modelled on the English periodical "The Spectator". It was published by the "Società dei pugni" (Society of Fists), members of which included the Milanese brothers Pietro (1728-97) and Alessandro Verri (1741-1816), the philosopher Cesare Beccaria (1738-94) and the mathematician Paolo Frisi (1728-84). Covering a large range of subjects, the journal's emphasis was on economics and public policy. It did not enjoy a long life: the first issue appeared in June 1764 (at Brescia to avoid censorship), the last in May 1766. The first collected edition appeared as early as 1765-66 in Brescia, and a second one in Venice in 1766. In 1764, the year that "Dei delitti e delle pene" was published, Beccaria contributed to one of the first issues an article on the relationship between tariffs and smuggling ("Tentativo analitico su i contrabbandi", vol. 1, pp. 122f.). This essay has been recognized by various authors as an important early contribution to mathematical economics and is been treated at length by Reghinos Theocharis. Beccaria posed the problem of a smuggler desirous to compute the risks of his profession. He attempts to express in algebraic formulae the relations between the value of goods purchased by the smuggler, the value of goods left after part of the goods have been seized by customs, and the value of the confiscated goods. This article "intended to convey a slight idea of how economic science may be considered analytically". Beccaria reasoned that algebra is "a precise and quick method of reasoning about quantities, which can be applied not only to geometry or mathematics but also to economic problems". While the articles are signed with an initial only, the present edition includes a publisher's note which resolves their identities. Both volumes have also an added leaf with a systematic table of contents.

Occasional foxing. Two old stamps to title of first part, and another to title of the third. 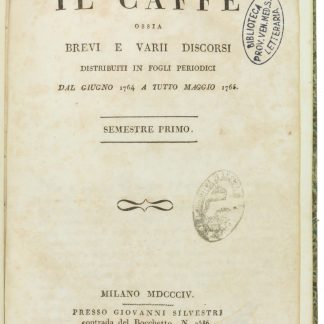