4to. 287, (1) pp. With fine vignette on title-page and at the head of p. 3. Contemporary full marbled calf, spine attractively gilt, gilt triple-fillets on both covers. All edges red.

First and only edition. A collection of official documents relating to Turgot's dissolution of the craft guilds and their partial revival after Turgot's fall as minister of finance. The famous preamble has been recognized as among the most important statements in political economy: here, Turgot declares man's fundamental right to work: "God, by giving to man wants, and making his recourse to work necessary to supply them, has made the right to work the property of every man; and this property is the first, the most sacred and the most imprescriptible of all". It has been noted that this preamble includes arguments against trade corporations similar to those used in the same year by Adam Smith in the tenth chapter of the first book of his "Wealth of Nations". The function of the guilds or jurandes was to maintain the interests of their members by limiting the admission of new members, regulating the length of apprenticeship and the issue of "lettres de maitrises" to those who qualified for membership. Though the system did offer some guarantees of consistent quality, they also prevented free competition and caused increases in prices. In early 1776 Turgot presented his famous six edicts to the King. The first contained the abolishment of the corvees, the second, third, fifth and sixth the suppression of various taxes and tolls. The important fourth edict contains the suppression of the guilds. Turgot's proposals were accepted by the King, but parliament refused their registration, and a lit de justice was necessary which earned Turgot the animosity of many, leading to his dismissal shortly after.

The present volume begins with the text of the fourth edict, the "Édit du Roi, portant suppression des jurandes & communautés de commerce, arts & métiers" of February 1776 (pp. 3-22), with Turgot's famous ten-page preamble. This edict is followed by several other edicts and numerous Arrets du Conseil d'Etat du Roi restoring the old corporations, though in a more liberal sense: the edict of August ordering the establishment of the Six Corps and 44 other corporations, the Lettres-patentes du Roi inviting tenders for supplying the court, the Declaration du Roi ordering the establishment of a Syndic for the free professions, the Declaration du Roi en faveur des artisans du Fauxbourg Saint-Antoine, the edict reforming the corporations in Lyons, the similar edict for the other towns, the Declaration du Roi concerning the pharmacists and chemists, etc. 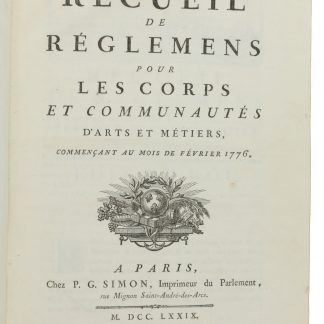