The expenditures of the Prague court in the year 1565

Exceptionally attractive and important manuscript from the Bohemian Royal offices; the principal document of the Bohemian national finances in the second year of the rule of Emperor Maximilian II. A beautiful and hitherto unknown document of Renaissance bookkeeping in its well-preserved original binding.

In the present manuscript, Johann Rabenhaupt, head of the Royal bursary and responsible for the accounting year 1565, has testified the correct statement of revenues and expenditures by his signature on every page. The volume begins with an alphabetical index, arranged in double pages and listing revenues (on left) and payments (on right) by name. Among the payers and recipients are several important names, most of them members of German-Bohemian, Czech and Polish noble families, the Tyrolean glass manufacturer Sebastian Hochstetter von Scheibenegg (d. 1573), but also the great physician Pietro Andrea Mattioli (1500-77): "Petter Andreas Mathiolo [...] Ertzherzog Ferdinanden zu Osterreich LeipPhisicus, hatt zu farlicher Provision Ainhundert gulden Reinisch, die khun zwayundvierzig schockh Ainundfunffzig groschen drey pfennig behamisch; dieselb hab ich Ime für dreyzehen Monat Anzuraitten [...]" (f. 263v). Mattioli, known especially for his Dioscorides commentary, moved to Prague in 1552 as personal physician to Archduke Ferdinand, where he was later to be made head medical advisor to Emperor Maximilian II (cf. Hirsch IV, 168). The volume not only documents salaries, duties, and court expenditures, but also the receipt of border taxes, Turk taxes, tithes, loans, deposits, realties, costs of funerals and the Prague castle vineyard, etc.

Johannes Rabenhaupt von Sucha, the man responsible for this splendid Renaissance account book, was a descendant of an old Bohemian noble family which is also documented in the Palatinate, in Franconia, and in Upper Austria. Although there have been attempts at biographical studies of the Royal bursar Rabenhaupt (without knowledge of the present manuscript), historical science has been forced to admit its temporary failure in this respect (see literature below). 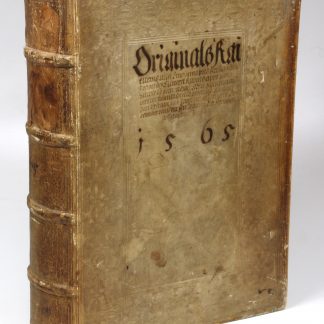