Travels to the East Indies, China, Middle East and the Gulf

First Italian edition of a fascinating and detailed account of the first overland journey from Spain to the East Indies (1671-80) made by the Spanish missionary Sebastian Pedro Cubero. Interestingly, Cubero covered most of his route by land, as would later Careri, thus constantly being able to observe the customs, religions, ceremonies and costumes of the peoples he visited, describing them in considerable detail. After spending time in Italy, where he was appointed as a missionary to Asia and the East Indies, Cubero travelled by way of Istanbul and Moscow to Iran, visiting Isfahan ("Hispaham") and Bandar Abbas, after which he finally arrived in India. After crossing to Malacca he was imprisoned by the Dutch and later banished from the city. He then proceeded to the Philippines and ultimately, by way of Mexico, back to Europe. "After a stint as confessor in the imperial army in Hungary, Cubero became one of the notable travellers of the seventeenth century. What set him apart was the variety of his traveller's hats. Most obviously a missionary [...], he also became [...] a representative figure of the whole exploratory enterprise. By circumnavigating the globe in his travels, he was recognized in his own time to be another Magellan, Drake, or Cavendish" (Noonan). Included are three very three very detailed chapters of devoted to China, Tartary and the Chinese-Tartarian wars. Additionally, there are important discussion of Persia, India, Malacca, the Philippines, and Mexico; chapter XX (pp. 136-156) contains an extensive discussion on Islam, the birth and death of Mohamed and Mecca and Medina. Chapter XXXIII (p. 225-229) contains a discussion of the the Kingdom of Ormuz and Bandar Abbas, the city on the Straits of Hormuz at the mouth of the Persian Gulf.

Bookplate of the New York "Explorers Club" (James B. Ford Library) to pastedown. Old inscriptions to front flyleaf; occasional stains. Lacks lower flyleaf; small tear to corner with loss of some text to fol. O4. This is the only copy of this edition that appears in the auction records over 30 years, no copy in the trade. 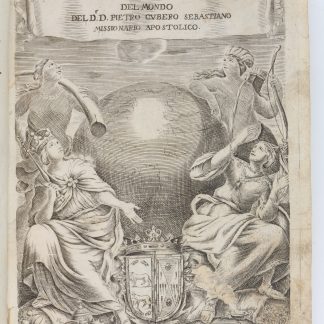