The first printed eyewitness account of any place in today's UAE: an excellent, entirely complete copy with fine provenance

Sympathetically washed but not pressed; some minor repairs to title not affecting printed surface. Some remaining toning and staining in small areas of a few leaves. Generally a wide-margined and appealing copy.

Provenance: acquired from Quaritch in 1975 by Gregory S. Javitch (1898-1980), a Russian-born, Canadian leader in the land reclamation sector in Ontario. Javitch formed an important collection of 2,500 items entitled "Peoples of the New World", encompassing both North and South America, which was acquired by the Bruce Peel Special Collections at the University of Alberta. It was considered the finest such private collection in Canada at the time and formed the cornerstone of the library’s Special collections. The present volume remained in Javitch's private collection was acquired directly from his heirs. 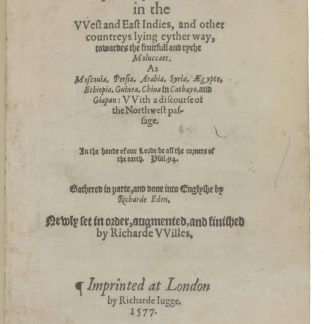