The first photographic book to appear on the Nejd

Intriguing photo publication of both Iraq and Central Arabia during the Great War, brought out by St John Philby at the end of the year 1918, after he had served with the British administration in Baghdad from 1915 to 1917 and then travelled through the interior of the Arabian Peninsula as head of a mission to Ibn Saud. Philby completed a great tour of the Nejd in nine months, covering some 4000 kilometres. "Over 600 photographs were taken, some of which were later published in 1918 in 'Iraq in War Time', the first photographic book to appear on Najd" (Badr El-Hage, p. 95f.). The book, captioned throughout in English and Arabic (in which Philby was fluent), is divided into four sections: "Groups and Portraits" (43 illustrations); "Local Events" (55 illustrations); "Views" (112 illustrations, including "In Basrah City", "Amarah", "Nasiriyah", "Baghdad", "Najaf", "Mosul", "Suq al Shuyukh", "In Persia"), and "A Tour through Central Arabia" (24 illustrations). Among these are numerous equestrian images ("The best Arab horse 'Winchester' owned by Fahud el Nasar", "Well-known Basrah Race Horses", "Arabs competing for a prize offered for the best Arab mare", "Judging the Arab mares", "Winner of the Prize for Arab Mares" etc.), and the portrait section contains a veritable gallery of the sheikhs and political officers of the Arabian scene during the Great War.

The tour of the Nejd shows fascinating images of Jeddah, Nafudh, Sakha, Madhiq, Riyadh, Al-Hafar, Saqtah Gorge, the Shamsiyah Garden, etc., as well as Arab chiefs and a group portrait with the anonymous tourist Philby himself, surrounded by his Bedouin escort. "Although Philby was an amateur photographer, and the quality of his photographs fails at times to be up to standard, his achievements were remarkable, and his photographs documented many towns and villages for the first time" (Badr El-Hage, p. 114).

Near-indecipherable ownership inscription of Sheikh Abdulkareem bin Khaz’al, or possibly of the Sheikh of Muhammerah, Khaz’al bin Jabir bin Merdaw al-Ka’bi (1863-1936), to the verso of the rear free endpaper. A photograph of the Sheikh of Muhammerah appears in Part II. A few small scuffs and stains, corners bumped. A good copy of this rare and important work usually encountered only in poor condition. 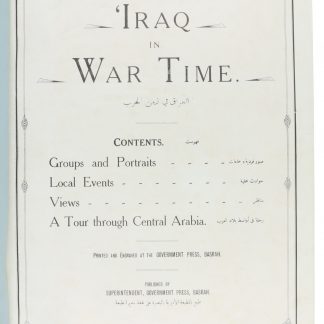