Engels, Friedrich. The Condition of the Working Class in England in 1844. With Appendix Written 1886, and Preface 1887. Translated by Florence Kelley Wischnewetzky.

First British edition of the first English translation. This British edition was almost certainly issued to tie in with the publication of the latest English translation of Engels and Marx's "Manifesto of the Communist Party", also published by Reeves in London in 1888. It was published using the sheets of the first US edition which appeared in New York the previous year; the first edition printed in the UK did not appear for another four years. Whilst the first New York edition is uncommon, this London edition is particularly scarce with scant few auction records and not many institutional holdings: Copac lists two in the UK, at the British Library and Oxford, with Worldcat listing three more, two in the US and one in the Netherlands.

A few blemishes to the contents, occasional old pencilled underlining and marginalia, sometime neatly recased with new endpapers, some light wear to the edges of the binding, but generally a decent copy. Provenance: formerly in the Midlands Workers' Library of Birmingham with their loan label to the second free endpaper (listing a single loan in March 1945) and the faint remains of a white numbered shelfmark to the spine; the library's highly distinctive and attractive pictorial bookplate to the front pastedown featuring illustrations of workers set amid Communist iconography. 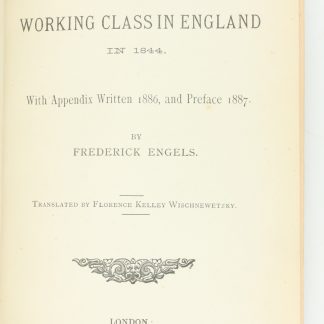