"The pearl of all books printed in Vienna" (Mayer)

Small folio (202 x 279 mm). (6), LXXX (but: 84), (1) pp. (collation: A6; B-N4 [N4 blank], O-P4 Q2, R-X4, x2, Y-Z4). Title page printed in red and black surrounded by a border of 10 armorial woodcuts. With full-page woodcut portrait of Emperor Ferdinand I by Donat Hübschmann on verso, large emblematic etching by Johann Schlutpacher von Rauris (A6v), full-page woodcut by Hans Lautensack of the standard-bearer Heinrich the younger, Burgrave of Meissen (E1r), 45 woodcut coat-of-arms in quire x, on Z1r woodcut device incorporating the arms of the printer, a Polish nobleman. 7 large folded etched plates, including two by Hanns Lautensack (at G4 and N4), one attributed to Francesco Terzi (at H2), one by the monogrammist FA (at I3), one attributed to Giovanni Guerra (at Q2), one unsigned (at X3), and one attributed to Johann Thwenger. Early 19th century half calf.

First German edition of the finest early printed book on tournaments. It describes in detail and spectacularly illustrates the tournaments, staged battles (including an elaborate naval scene), balls and banquets, held at Vienna to honour the visit of Albrecht V Duke of Bavaria (1528-79), son-in-law of Emperor Ferdinand I and brother-in-law of King Maximilian of Bohemia (Emperor Maximilian II from 1564 onwards). According to Graesse (II, 629), the Latin edition of the same year has different illustrations, which he describes as "moins bonnes", and the same is true for Feyerabend's Frankfurt edition appended to Rüxner's "Thurnier Buch" (1566). The author served as herald to John II Sigismund, King of Hungary.

In complete condition with the full complement of etched plates, the book is of the utmost rarity; both Ruggieri copies were imperfect, and Bartsch describes only three of the etchings.

Fine impressions throughout. Some light browning and marginal fingerstaining; a few tears or flaws to the plates reinforced or rebacked. Rebound in the early 18th century for the Austrian infantry captain and secretary to the military court Franz von Grössing (his handwritten ownership at the bottom of title-page and colophon), preserving the upper third of the original flyleaf with handwritten ownerships dating from the 1560s (Rosina and H. V. Bastrig[o] 1561; gifted to Bernhard Kulmer by his sister Barbara Poltus, but returned to Bastrig in 1563 "as he will not allow the gift, and has a better right to the book"). Latterly in the library of the Viennese collector Werner Habel (1939-2015) with his handwritten and stamped ownership to the new flyleaf. 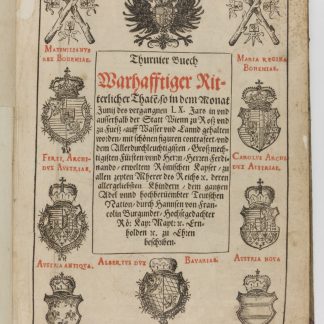