This splendid work, published on the occasion of the formal opening of the Court Theatre in 1667, contains the libretto and stage designs of the eponymous opera, produced in honor of the marriage between Emperor Leopold I. and Infanta Margareta Teresia of Spain. The "Pomo d'oro" is considered one of the 17th century's most significant achievements of the musical stage; Burnacini's imaginative stage designs are known only through these illustrations, congenially engraved by Küsell. The two additional plates which Vinet mentions, depicting interior views of the auditorium, are not contained in any of the copies cnsulted for comparison; they were produced only after Küsell had completed the series and were added to a very small number of copies. As they are not mentioned by the printed table of plates (ff. B1r-B2v), the work may be considered complete thus.

Occasional browning and waterstaining; several plates with signs of old remargining and restoration; slight defect to one plate (some loss to image, retouched). Attractive, uncommonly well-preserved copy in comparison with the five copies sold at auction during the past three decades (four of which were incomplete, wanting the engr. title page or one of the 23 stage-designs). From the collection of the Viennese brewer Joseph Wuensch (1843-1916) with his bookplate and library label on the front pastedown. 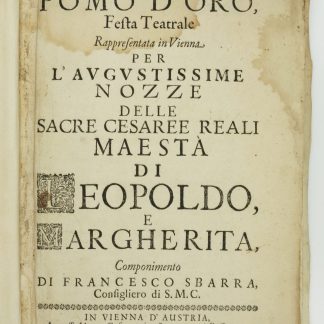