Two miscellanies of extraordinarily rare political pamphlets advocating the British labour movement. Uncommon in its extent, the collection encompasses several brochures prepared by the Communist Party of Great Britain, including articles on the general strike of May 1926 as well as a report on the party's Tenth Congress from 19-22 January 1929. Among other notable publications are the "Select Speeches of Kossuth" in their first edition (London, Trübner, 1853), an anthology of the most important addresses given by the leader of the Hungarian independence movement, Lajos Kossuth, during his visit to the United States between December 1851 and June 1852, edited by Francis William Newman. This takes up nearly the entire second half of volume 2 (376 pp.). The archive is completed by eight issues of the "Political Fly-Sheets" published by E. Tucker, whose contributors included the Scottish politician David Urquhart: vol. I, no. III ("England’s Part in Turkey’s Fall"), no. IV ("The War for Russia, not against Russia"), no. V ("Position of Louis Napoleon in respect to Russia"), no. VII ("The Invasion of the Crimea"), no. VIII ("The Words of Palmerston"), no. IX ("The Spider and the Fly"), vol. II., no. 1 ("The New Hope for Poland"), and no. II ("Letters on the Evidence of the Duke of Newcastle"). The remaining pamphlets address Jewish emancipation as well as British foreign politics, topics including colonialism and the "War on China".

Volume one has a contemporary ownership of "M. Mindel" to first leaf and flyleaf, probably the Socialist bookbinder Morris Mindel, with small binder's label of Mindel & Sirotkin to pastedown. Pamphlets in volume 1 numbered up to no. 11 in pencil. Binding of the half calf volume significantly rubbed. Full cloth volume has modern spine. Provenance: from the collection of Chimen Abramsky (1916-2010), London. 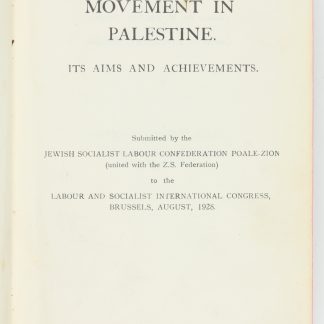