Dissertation on ancient Rome by the Austrian Jesuit and scholar of Roman law, Joseph Staininger (1700-66), discussing, inter alia, administration, jurisdiction, and military organisation as well as religion, the calendar, spectacles, fashion, measurements and even wedding and funeral celebrations. The folded table shows the various Roman holidays and mentions rules and bans for certain dates. With an index and a list of doctoral candidates at the end. Upper edge trimmed fairly closely.

(II): Epithalamium by the Jesuit and philosopher Franz Xaver Kislinger, written for the wedding of Maria Theresa and Francis Stephen of Lorraine in 1736, also published as a dissertation with the list of bachelor candidates at the end. Though bound with the "Manuale", it is not as closely trimmed at the right as is the former.

Old shelfmark in coloured pencil to first title-page. A few later pencil notes. Both works variously browned and brownstained. From the library of the Viennese collector Werner Habel. 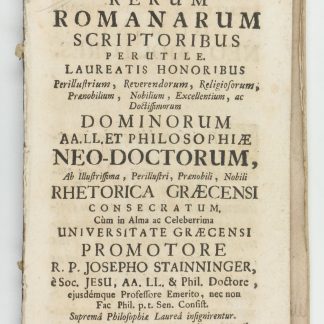