Morris Jeppson's hand-annotated blueprint of the "Little Boy" atomic bomb. Jeppson designates parts of the bomb and writes in part: "During the flight I removed 3 green electrical plugs and replaced them with red coded plugs. This allowed a detonation voltage to go from fusing to the explosive that fired the projectile of U235 into the target of U235 when the bomb reached about 1500 feet above Hiroshima." - Signed "Morris Jeppson | Weapon Test Officer | Enola Gay Mission | HIROSHIMA - 6 Aug. 1945." - Jeppson served as assistant weaponeer on the Enola Gay, which dropped the first atomic bomb on the city of Hiroshima, Japan on August 6, 1945. 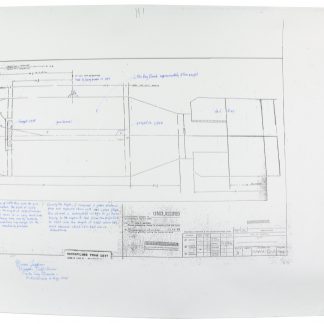