To an addressee in Brussels (name erased), who had inquired about animal testing by the NASA: "[…] Your lines […] never reached me and they seem to have been lost under mountains of mail, which the NASA received in connection with the first manned moon landing. I have never settled in Houston, but former director of the Marshall Space Flight Center in Huntsville, Alabama. Since March of this year I work at the administrative headquarter of the NASA in Washington […]. Concerning the problem of animal testing I can only tell you: Animal experiments are considered to be necessary for medical research and accepted in all countries […]. Nor the space program, neither I myself affected this development […]" (transl. from German). With letterhead of the NASA, "Office of the Administrator"; signature in felt pen. 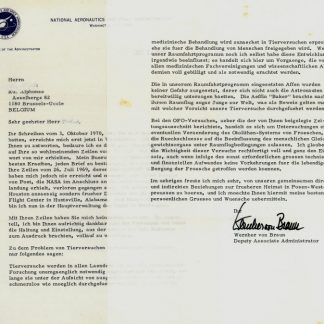