The Qanun, 4th Fen of Book 1, with commentary

Well-produced reissue of the 1560 first edition of this commentary to the 4th Fen of Book 1 of Avicenna's "Qanun", by the Bologna professor of logics and medicine, A. M. Betti (1480-1562). This part, the text of which is provided in full, is dedicated to general therapy, a staple of the compulsory teaching matter at mediaeval and Renaissance medical schools, if not one of the chapters most frequently to engender extensive published commentaries. Indeed, Avicenna's systematic "Canon of Medicine", written in Arabic but widely translated throughout the Middle Ages, remained the basis of medical training in the West until the latter half of the 16th century, when it gradually began to fall out of the syllabus at most European universities, not disappearing entirely until the mid-17th century. It continues in use to this day in parts of the Arab world. Through this encyclopedic work, the author exerted "perhaps a wider influence in the eastern and western hemispheres than any other Islamic thinker" (PMM). 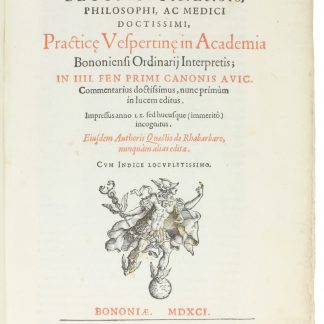