Early, if incomplete Latin edition of the famous "Narrenschiff", originally published in German verse in 1494 - also by Bergmann - and translated by the author's student Jacob Locher. One of literature's most famous satires and a milestone in the history of book illustration: many of the woodcuts depicting human foibles (here printed from the original blocks) are now attributed to the young Albrecht Dürer. Before Goethe's "Werther" arrived on the scene, this work was the most successful book ever published in Germany, immensely popular and read until it fell to pieces, and complete copies of the incunabular Basel editions are nearly unobtainable.

In his "Ship of Fools", Brant describes the voyage of a ship bearing one hundred fools, to the fools' paradise of Narragonia, thereby satirizing the follies of his time including representatives of every human and social type. "[T]he first original work by a German which passed into world literature [... it] helped to blaze the trail that leads from medieval allegory to modern satire, drama and novel of character" (PMM). Erwin Panofsky called the book "a remarkably complete mirror of human life", based upon the "universality of Brant's self-righteous surliness [...] and the picturesqueness of his metaphors" (Panofsky, p. 30). Incidentally, the book also contains the earliest literary reference to the discovery of America: "Hesperie occidue rex Ferdinandus: in alto Aequore nunc gentes repperit innumeras" ("Ferdinand, King of the West, recently discovered innumerable peoples across the high seas", fol. 76v). Tellingly, the humanist-printer Bergmann had published the famous "Columbus letter" in 1493.

Some browning and brownstaining; occasional underlinings by a near-contemporary hand (more frequent in the beginning and within the chapter on women). Folio b2 is loosened. Rebound in the 18th century (edges trimmed fairly closely). Small hole in the spine, otherwise well-preserved copy from the collection of the Swedish statesman and diplomat Lars von Engeström (1751-1826) with his engraved armorial bookplate (motto "speravit infestis", "hopeful in adversity") to pastedown. 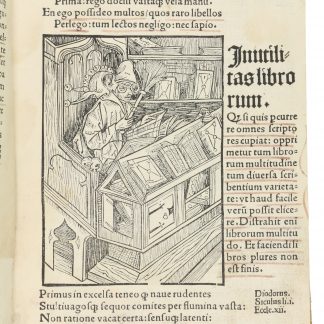