This seventh edition altogether is the first to contain extensive commentary, "a heavyweight volume both literally and metaphorically, edited by Cristoforo Berardi of Pesaro. The text does not follow a single previous edition, and it seems likely that Berardi's independence (as a Pesarese) from northern Italy led him to use a manuscript". The editor also included supplementary information, such as Boccaccio's Life of Dante (its first appearance in print) and rubriche at the start of every cantica. "Berardi's edition thus marked a new approach to the presentation in print of the major literary works in the vernacular" (B. Richardson, Print Culture in Renaissance Italy, 1994, p. 37).

Rare: only three complete copies recorded at auction, all in considerably later bindings. According to Rarebookhub and ABPC, the present volume is the only incunabular edition of Dante's "Commedia" still preserved in its first binding to have appeared on the market since 1960. 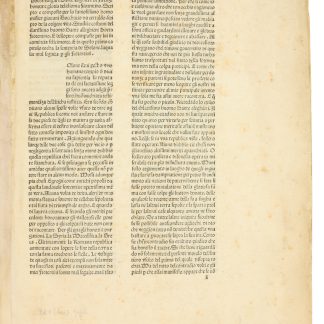