Written in collaboration with Karl Marx by his most loyal assistant

Second edition, first published in Berlin in 1869: an expanded German revision of the series of articles written by Eccarius in collaboration with his friend Karl Marx, entitled "A Working Man's Refutation of Some Points of Political Economy Endorsed and Advocated by John Stuart Mill", which had appeared in the "Commonwealth" newspaper in 1866-67, just as Marx was completing "Das Kapital". Much of the book, revised by Marx and thus an authorized expression of his views, is dedicated to the subject of capital, labour and population. Both Marx and Engels owned copies inscribed to them by the author; Marx mentioned the title twice in his correspondence with Engels (and later Engels in an 1885 letter to H. Schlüter). At the time of writing, Eccarius was one of the few so privileged to be shown parts of "Das Kapital" as it neared completion, and told friends that "the Prophet Himself is just now having the quintessence of all wisdom published". The copy of "Das Kapital" which Marx inscribed to Eccarius has recently been displayed at the Hamburg exhibition commemorating the 150th anniversary of what remains one of the most influential books ever published.

J. G. Eccarius (1818-89) was a German emigré tailor and labour activist in the English branch of the League of the Just. When Marx and Engels joined the League in 1846, it evolved into the Communist League, and in 1848 Eccarius was elected member of the new three-man Central Committee. A year later Eccarius co-opted Marx onto the same Committee (Marx later became President) and became his staunch supporter over the next two decades. Indeed, it was Marx who had given Eccarius his first publishing opportunity: Eccarius's article on "Tailoring in London or the Struggle Between Large and Small Capital" appeared in the London "Revue der Neuen Rheinischen Zeitung" in 1850. Marx helped him write the article, edited it, and probably formulated some of the passages - and then presented it to the public with a special blare of trumpets: "The author of the article is himself a worker in one of the London tailor shops. We ask the German bourgeoisie how many writers they have who are capable of comprehending the actual development in similar fashion [...] here a purely materialist and free conception, undistorted by emotional grumbling, confronts bourgeois society and its development" (quoted in the preface). Throughout the 1850s Marx continued to encourage Eccarius. He paid his friend's rent at a time when when he had to give up tailoring due to bad health, and when three of Eccarius's children died of scarlet fever in 1862, it was Marx who organised an appeal to cover the funeral expenses. In 1864 Eccarius attended the first meeting of the International Workingmen's Association, the "First International", and was nominated by Marx to speak on his behalf. Three years later, just before "Das Kapital" was published, Eccarius was elected the organisation's Secretary General. Despite this close collaboration and friendship, relations between the two deteriorated over time, and ultimately Marx openly split with him, describing his former friend as "a scoundrel pure and simple - canaille even". 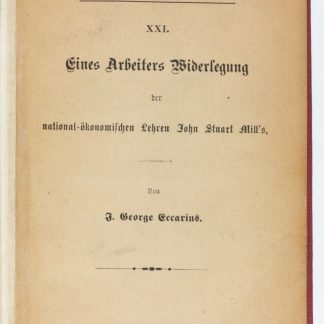