8vo. (96) pp. With arabesque woodcut border to title and 94 woodcuts by Bernard Salomon in the text.

First Latin editions, previously published in French (as "Quadris historiques de la Bible") in 1555. Each page contains four verses describing a scene from the Old Testament, accompanied by a delicately executed illustration (94 from Genesis, 77 from Exodus, and 59 from other books: a total of 230 woodcuts). Brunet gives 134 (instead of 136) woodcuts for the second book, remarking: "cette suite est fort jolie et fort recherchée". The fine series of illustrations shows the influence of Holbein and Beham, and yet is stylistically independent; "c'est l'oeuvre capitale de Bernard Salomon" (Rondot). There is no preliminary matter to the first book, but the second contains a preface and verses by Borlyut.

Occasional browning; title of first book torn and rebacked; several large tears and paper flaws throughout have been professionally repaired with minimal loss to text. Pages were washed and (in some case excessively) pressed before rebinding. All woodcuts are in good impressions. Provenance: bookplate of the Swiss minister Gaspard Ernest Stroehlin (1844-1907), professor of church history at the University of Geneva; below this slightly later bookplate of G. Velmay. Latterly in a Russian private collection. 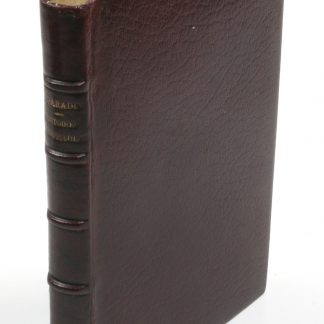