Later German edition of this finely engraved instruction book for drawing the human body and anatomy, translated from the popular work of Carlo Cesio (1626-86), "based on Vesalian drawings" (Choulant, p. 37). "His anatomy for artists, 'Cognizione de muscoli del corpo umano per uso del disegno', appeared at Rome in 1697 and in German at Nuremberg in 1706, 1759, and 1780" (Thieme/B.). Cesio, a pupil of Pietro Berettini, lived in Rome, where he "maintained in his own house an academy for artists [... His book] contains sixteen pages of illustrations with explanations, among them five complete muscle-manikins [...] Johann Daniel Preissler published these plates in a German edition at Nuremberg, 1706" (Choulant). Preißler (1666-1737), a member of a Nuremberg artists' dynasty of Bohemian origin, published several such pattern books and is also known for his series of ornamental, Biblical and allegorical engravings. The preface of the later German editions, which were was probably released by Johann Daniel Preissler's son Johann Justin, is dated 1743. 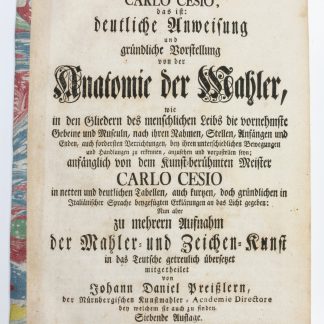