First French edition, containing an extremely rare calligraphic inscription, brush-written by Mao Zedong in 1965 shortly before the Great Proletarian Cultural Revolution, to the foreign diplomat Charles Meyer (1923-2004). The French national Meyer spent 25 years in Indochina, including 15 years in Cambodia during the 1950s and 1960s, serving King (and later Head of State) Norodom Sihanouk as media and public affairs advisor. He formed part of the Sangkum government’s inner power circle and served as the author and editor of many official government publications. He also wrote several books on Cambodia, including the historical accounts "Behind the Khmer Smile" (Plon, 1971) and "The French in Indochina: 1860-1910" (Hachette, 1996). Meyer left the country in 1970 in the wake of the coup d’état and the advent of the Khmer Republic.

When in the early 1960s Prince Sihanouk came to recognize revolutionary China as Cambodia's most valuable ally, Meyer took part in several high-level meetings in Beijing and on the Yangtze River that the Prince held with Mao Zedong, Zhou Enlai, and Chairman Liu Shaoqi. He was present at the 1964 talks with Zhou Enlai to promote Khmero-Chinese friendship and a member of the Cambodian delegations in 1964 and 1965. It was on one of these diplomatic missions that Mao Zedong honoured Meyer by this exceptionally rare token of his esteem. 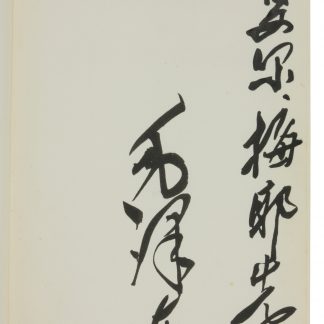