Unique: one of the earliest extant table football sets

Housed in a lidded oak case (220 x 556 x 410 mm): a green-painted pitch with carved, yellow-painted grooves terminating in seven recesses, each contested by two plungers actuated by seven finger-pieces at each end; further finger-pieces actuate plungers in the goal mouth; the mechanism underneath. Two brass scoring plaques to each side. Includes ten balls as well as related documentation, including patent letter.

An early 20th century patented football game in its original box: the prototype for a design that never went into production, and hence the only specimen in existence.

The game appears to have been developed in 1912 by the west London plumber George Bush. The board which represents the football ground features goal posts at opposite ends between which the ball must be placed to obtain a goal; around the board runs a fencing of posts and horizontal cords which prevent the ball from rolling off the board. The ground is marked by a series of depressions, each of which has a series of grooves which steer the ball towards their centre. At the centre of each of these depressions are two plungers, one of each connected through a hidden lever to a finger piece at opposite ends of the board, operated by the opposing players. Each of these plungers face and operate in a different direction pointing towards the opponent's goal, and by actuating the finger pieces, players may knock the ball from the space until one of them secures a goal by knocking the ball into the recess between the opponent's goal post.

Bush first gave a handwritten description of the game on the back of a Hammersmith property rental agreement dated 12th December 1911 (included). A patent application was filed by Bush and fellow plumbers Henry Booth and John Watson on 31 May 1915, and the patent numbered 8033/1915 (likewise included) was approved. In the immediate aftermath of the Great War, the "Bush Ball Game" was renamed "The Allies Onset or Table Football", and marketing leaflets were produced suggesting that wounded or disabled servicemen would thus be able to "realize the full extent of excitement from their old pastime, when they played on the field". Although in 1922 drawings and the prototype were sent to "The Lord Roberts Memorial Workshops for Disabled Soldiers & Sailors" in Knightsbridge, the intricate mechanical construction (which may be examined by removing the game from its case) proved "rather beyond the powers of the men available", and the system never matured to serial production. Instead, the 1920s saw the development both of the now-familiar table football set using figures mounted on rotating bars and of the not dissimilar "Tipp-Kick" table football game that remains popular in Germany, while the ingenious present design slipped into obscurity.

Documentation includes the patent letter, 2 typed letters from the Lord Roberts Memorial Workshops regretfully declining the game as "[not] suitable for manufacture at these Workshops", typed letter from patent agents, 5 pp. patent specifications No 8033 A.D. 1915, part of 1907 patent description and diagram for another machine, advertising material, 1 p. of written notes dated 1912 on "The Bush Ball Game". 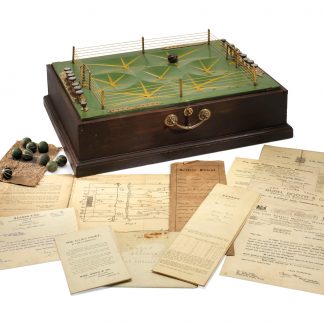