Satirical poetry by a Medici opponent who fled Florence for France

2 volumes bound as 1. 8vo. (16), 431, (1 blank); 295, (7) pp. With 2 title-pages, each with the same woodcut Giunta device (a decorated fleur-de-lis in a wreath with 2 putti), a full-page woodcut showing a larger version of the same device on the last printed page of vol. 2, and about 90 spaces with guide letters left for 3-line manuscript initials (not filled in). Set in an Aldine-style italic (with upright capitals), but the imprint in the first successful italic with sloped capitals, headings (including the titles) in roman capitals. 18th-century gold-tooled mottled calf, sewn on 5 recessed cords, each board with a frame made from a single roll, the spine tooled as a single field (filled with a 7 mm roll of diagonal lines) except for a separate field for the red morocco label, gold-tooled board edges, marbled endpapers (Dutch pattern in red, blue, yellow, green and white), red edges, headbands in green, tan and white, green ribbon marker.

Third edition of frequently satirical poetry and plays written in (mostly blank) Italian verse by the Florentine statesman, poet and playwright Luigi Alamanni (1495-1556), the two volumes first published in 1532 and 1533. He and his contemporary Giangiorgio Trissino pioneered the use of blank verse in Italian poetry. The French King François I (1494-1547), who promoted Renaissance Italian ideas and fashions in France, had been allied with the Medici in Florence, but when Giulio de' Medici (from 1523 Pope Clement VII) and François I fell out in 1521, Luigi Alamanni, whose family had long supported the Medici, took François's side and plotted against Giulio. As a result Luigi had to flee to France, living part of the time in Lyon and frequenting François's court in Paris. He returned to Florence when the Medici fell in 1527 but fled again when they regained power in 1530. As a result, he wrote most of his works in France, and Sébastien Gryphius first published them in two volumes at Lyon. The second editions followed in Italy in the same years, published by Bernardo Giunta in Florence (volume 1) and Melchior Sessa in Venice (volume 2). Each volume of the present third edition includes a (different) dedication to King François I. The literary content is: volume I: Elegia (in IV libri with X, VII, VIII & V elegies); Egloga I-XIIII; Sonettini; Canzone; Favola di Narcisso; Il diluvio Rom[ano]; Favola di Athlante; Satire I-XII; Luigi Almanni a Bernardo Altoviti S.; Salmi penit[entiali] I-VII. Vol. II: Selve (in III libri with VII, V & V silvan poems); Favola di Phetonte; Argomento di messer' Antonio Bruciolo sopra l'Antigone; Tragedia di Antigone; Hymni I-VIII; Stanze; Sonetti.

With alphabetical indexes of the poems at the beginning of volume 1 and the end of volume 2.

The book was printed for the Giunti heirs by Peter Schoeffer the younger (ca. 1475/80-1547), the son of Gutenberg's assistant, who began printing in Mainz, but printed in Venice in 1541 and 1542. He was an important typographic punchcutter, so that the book shows types often of his own cutting. The italic used for the imprint is especially interesting as the second (and the first successful) italic to use sloped capitals: that used for the main text follows the earlier Aldine italics, with upright capitals. Schoeffer's present italic with sloped capitals, apparently completed in 1537, proved very successful and helped make sloped capitals the norm for italics.

With an early owner's inscription at the foot of the title-page. The first page and last page are very slightly browned and one page has torn at the foot along the gutter fold, but the book is still in very good condition, most leaves fine. With the front board detached, the back hinge worn, a vertical crack down the spine (with a chip at the foot and damage to the headband), and the right half of the spine label lost. 16th-century Italian poetry of both literary and political interest. 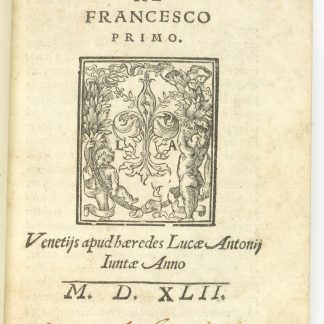