From the library of the historian and theologian Gottfried Bessel, abbot of Göttweig

Rare first edition of this eyewitness account of the Great Northern War, in which the "Little Prince" Maximilian Emanuel of Wuerttemberg-Winnental (1689-1709) took part on the Swedish side. Captured by the Russians in the Battle of Poltava, he died at Dubno. On his journeys he was accompanied by the preacher J. W. Bardili (1676-1740, grandson of the physician Carl Bardili), who later published the present report, containing numerous interesting geographico-cultural observations on Belarus, Smolensk, Sivershchyna, Volhynia and the Ukraine: "The country known as Ukrainie is splendidly fertile and produces such amounts of crops that they can impossibly be stored away, for which reason a large proportion of grain is used for brandy, a drink of which the inhabitants are not only great connoisseurs, but of which they are also wont to possess quite significant quantities. The grass is rich [...]. Thus fed, the Cossacks' horses grow very strong and durable, and they are able to remain outside, throughout summer and winter, until they are five or six years old, and only then are they slowly accustomed to the saddle and bridle" (cf. p. 422). From p. 481 onwards, the book contains an anonymous account of the ensuing events informed by the operations of the Ottoman Empire (such as the Turkish captivity of Charles XII at Bender).

Some occasional browning and staining due to paper. The half-title belonging to the appendix ("Reise-Beschreibung von Pultawa nach Bender", pp. 481 ff.) is erroneously bound after the preliminaries. Both covers bear the giltstamped arms of the Benedictine monk and scholar Gottfried (Johann Georg) Bessel (1672-1749), the probably most important abbot of the Austrian Abbey of Göttweig (1714-49), which he had rebuilt in 1718, following a fire, based on plans by Johann Lucas von Hildebrandt. Hailed as "Germany's Mabillon" for his pioneering work in diplomatics and the auxiliary sciences of history, Bessel authored the "Chronicon Gotwicense" and served as rector of the University of Vienna from 1714 to 1716. 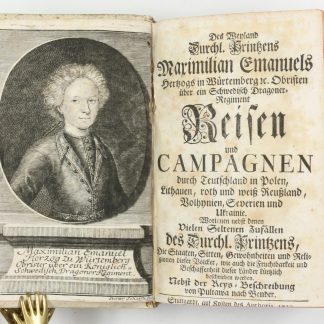