A privately assembled photo album showing the ruling family of Dubai during a state visit to Pakistan, apparently in the early 1970s. Pakistan was the first country to accord formal recognition to the United Arab Emirates after the state's emergence in 1971.

Nearly half of the images show HH Sheikh Rashid bin Saeed Al Maktoum (1912-90), the father of the modern Emirate of Dubai, in conversation, at dinners, and relaxing in the garden. Other photos show his sons, the crown prince and later ruler HH Sheikh Maktoum bin Rashid Al Maktoum (1943-2006), the present ruler HH Sheikh Mohammed bin Rashid Al Maktoum, and HH Sheikh Ahmed bin Rashid Al Maktoum. The collection was assembled by Azhar Abbas Hashmi, a high-ranking officer of the Pakistani UBL bank (United Bank Limited), founded in 1959 by Agha Hasan Abedi (1922-95), who is seen in seven photographs with HH Sheikh Rashid as well as with his two older sons. While several pictures show the members of the royal family in negotiations with the Karachi banking officials, there are also fascinating images of a falconry tour to the Pakistani countryside (including a fine portrait of HH Sheikh Ahmed with a falcon perched on his arm). The more than fifty original colour slides show other scenes of the same visit; only four of the images are among the prints included in the album.

Some occasional creases and even the odd tear, but in general finely preserved. Three photos printed by Karachi's "Eveready Studio", some inscribed in ballpoint with identification on the reverse ("Mr. S. L. Anwar, HH, Mr. Masood Naqvi, Mr. Iqbal Khateeb / Mr. Hashmi showing the prospect drawings"), one in Arabic, another with ownership stamp: "Azhar Abbas Hashmi, Vice President Gulf Operations, International Division, UBL, HO, Karachi". An unpublished set, entirely unknown and without counterparts in the online Keystone or Hulton/Getty press photo archives, from the estate of Azhar Abbas Hashmi (1940-2016), Pakistani financial manager and eminent literary patron with close ties to Karachi University. Long with UBL, Hashmi would serve as the bank's vice-president before founding several important cultural organisations and becoming known as a man of letters in his own right. It was because of Hashmi’s close connections to the Gulf states that Abu Dhabi provided funds to build the Karachi University’s faculty of Islamic studies, along with Sheikh Zayed Islamic Centre and Jamiya Masjid Ibrahi. 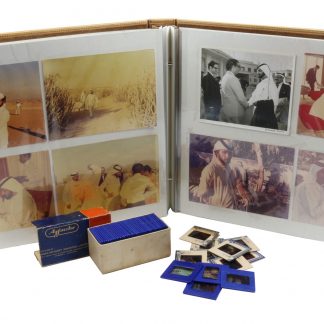