A large collection of 807 photographs, providing a unique view into the private life of Sheikh Zayed bin Sultan Al Nahyan (1918-2004), ruler of Abu Dhabi and founding father of the United Arab Emirates. The photographs depict Sheikh Zayed and his family, including Sheikh Khalifa bin Zayed Al Nahyan (b. 1948), relatives and friends partaking in various leisure activities. Also included are some photographs of children, probably including Sheikh Zayed's sons, possibly Sheikh Mohammed bin Zayed Al Nahyan (b. 1961). The pictures date from a significant period in the history of Abu Dhabi, the years leading up to the foundation of the United Arab Emirates in 1971, and from the earliest years of the new federation.

A group of pictures is possibly taken in Pakistan, many depicting a large manor where a party arrives by helicopter. Sheikh Zayed enjoyed visiting the country to go horse riding and hunting with his falcons. Many photographs depict casual dinner parties, gatherings, and meetings in the open air. Other photographs show a large party setting off on horseback, falcons, camel races, cars, etc.

Some photos slightly curled along the edges, some slightly discoloured. Overall in very good condition. 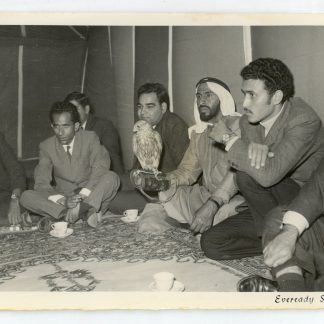