"Secret": wartime notes and correspondence from the desk of the Aden Residency

A collection of prewar and wartime notes and correspondence, some labelled "secret", from the desk of the longtime First Assistant Resident in Aden, Lt. Col. Harold F. Jacob, who served in this capacity from 1910 to 1917 (and, once the War started, was also Chief Political Officer to the Aden Field Force).

In a classified report to a superior concerning tribal allegiances in Yemen and the threat of an Ottoman incursion, dated 30 June 1915, he writes: "Interviewed the Abdali Sultan at Lahej yesterday and the following is what I have been able to elicit. 1. The Sheikh Ibn Nasir Mukbil appears to be particularly anxious to secure our armed presence on the Haushabi border and Sheikh Husen Saleh the Azraki (our stipendiary) and Ali Ba Saleh the Haushabi Sultan's Minister seem to be willing tools in his hand to effect that purpose. It must be remembered that Ibn Nasir Mukbil is still friendly to us or rather his unfriendliness is not proved. [...] It is hard to prophesy correctly in Arabia, and from a distance, since Arab politics change in so kaleidoscopic a fashion, but I am inclined to believe, even if there be certain hostile Turks and Arabs at Al Dareja, that the situation is not so critical as our friend the Abdali Sultan would have us believe. [...] [A]s the Sultan of Lahej is able to procure at this stage 600 camels in 2 days I am strongly in favour of our engaging them since, if hostilities open, he will find it extremely difficult to raise these numbers [...]".

A telegram draft of 10 January 1917 to the General Officer Commanding Aden, likewise "secret", Jacob writes: "Idrisi quite ready conclude supplementary agreement as outlined by Secretary of State (stop) [...] Says Farasan is part & parcel his sea-board and expects British protection from all outside interference (stop) Says British flag, however, as repugnant on Farasan as would be at Jizan and likely draw Turkish vengeance as implying cession of Islands to us; further will preclude future favours qua arms from France and Italy (stop) I fully sympathize with both agreements and believe presence of flag will place Farasan in category of annexation subject to 'post-bellum' adjudication (stop) [...]".

Also, several items of Arabic correspondence, often with Jacob's handwritten translation into English underneath. Also, a quantity of 8vo pencil notes in English and Arabic, some in the hand of another officer (possibly the Aden Resident) and as early as 1911, often not easily legible, apparently referring among other subjects to "Philby", "How Turks lost the Yemen", etc.

Jacob spoke Arabic fluently and knew the Qur'an intimately. As Political Agent in Aden and in the Hinterland he served on Lord Allenby's staff as an advisor on South West Arabia, where he became acquainted with Lawrence of Arabia. In 1915 he published a book on Southern Arabia, "Perfumes of Araby. Silhouettes of Al Yemen".

Edges brittle; some browning and folds, but altogether a well-preserved survival. 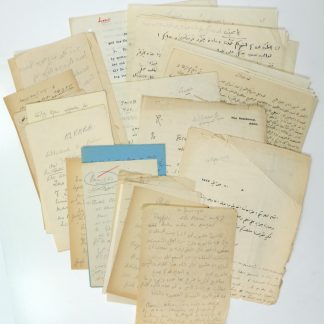