Rare edition of the collected works of Luis de Camões, including Os Lusiadas and three Rimas. In the same year, Antonio Craesbeeck published another edition with the same title but with less content and with a different frontispiece. This collection of works is made up of separate publications.

Os Lusiadas is the great epic poem of Portuguese exploration, in the original Portuguese, a monument of Portuguese literature that gave a Homeric aura to Renaissance voyages of discovery and colonial conquests, here together with the other works of Camões. Camões's work was first published in Portuguese at Lisbon in 1572.

In the early 1530s the great Portuguese historian, João de Barros, most famous for his Decadas de Asia, had called for an epic poem of Portuguese exploration and discovery. Luis de Camões (1524-80) answered that call four decades later. Camões was educated in a monastic school in Coimbra, and produced poetry and plays at an early age. In his early twenties he was banished from Lisbon after producing a play considered disparaging to the royal family. He served as a soldier in the Portuguese forces besieging Ceuta in North Africa, where he lost an eye. Camões returned to Lisbon in 1550, but found himself in more trouble, and was pardoned by the King on condition that he serve the Crown in India for five years. He arrived at Goa in late 1553 and stayed there briefly before joining an expedition to the Malabar Coast. Later he participated in a campaign against pirates on the shores of Arabia. In 1556 he left Goa again for the East Indies, taking part in the military occupation of Macao, where he remained for many months. On his return trip to India, he was shipwrecked off the Mekong and wandered in Cambodia before reaching Malacca and eventually returning to Goa. He did not return to Lisbon until 1570. The Lusiads gives a fine description not only of Portuguese exploits in the East, but also of the flora and fauna of Asia and India, the ethnographic details of the peoples there, and the geography of the region, informed by Camões's own experiences as well as his familiarity with Ptolemy and Barros.

With the bookplate of "Aulo-Gélio", 1961, with a view of Lisbon. The first few pages slightly worn with some repairs. Stained throughout. Some contemporary annotations in ink in the margins. 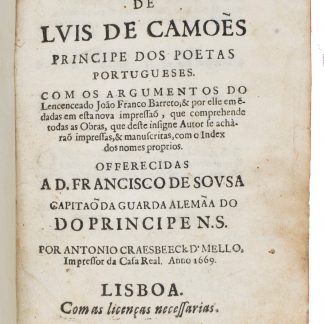