Political map of Asia prior to WWI, showing the Arabian Peninsula and the Gulf, the Ottoman Empire, Russia, China, India, Japan, and South East Asia, including the Philppines and Indonesia, as well as large parts of Europe and the westernmost part of Africa. With an inset map of Tokyo and its surroundings (1:500,000).

Slightly foxed. Frame with some traces of worming. An appealing map in an attractive wooden frame with a gilt border. 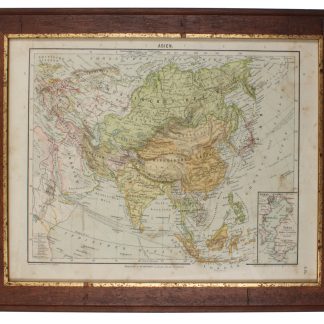