The second anniversary of the Balfour declaration

A speech given by the British politician Samuel, appointed High Commissioner of Palestine in 1920, at a meeting led by the English Zionist Federation, celebrating the second anniversary of the Balfour declaration, "which stated that the Government favoured the establishment of a Jewish National Home in Palestine".

Minor flaws to the edges, not touching text. 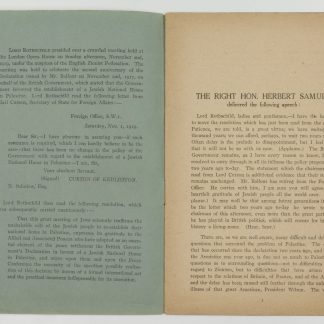