Complete with the very rare appendix of maps. In reaction to the 1929 violent unrest in Palestine, the British government in 1930 sent the Shaw Commission ("Palestine. Statement with regard to British policy", Cmd. 3582) to report on the situation in the Mandate. This concluded that Jewish immigration pressurized and displaced the Arab population, and rejected the view that the Jewish National Home was the principal feature of the Mandate. The Shaw Commission recommended an investigation into Palestine's economic absorptive capacity of Jewish immigration, and the present publication, Sir John Hope Simpson's report, concluded that the increasing number of Jewish land purchases was leading to a growing population of landless Arabs. Hope Simpson's recommendations of reduced Jewish immigration and restrictions on land transfers were adopted by the Passfield White Paper ("Palestine. Statement of policy by His Majesty's Government in the United Kingdom", Cmd. 3692) that same year. 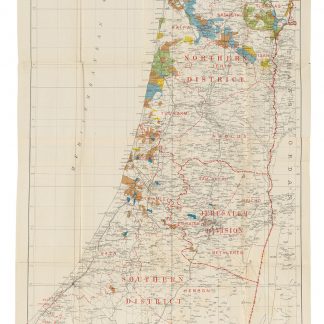