Extremely rare first separate French edition of this seminal historical document. Published by "L'Ère Nouvelle", the first French journal devoted to Marxist philosophy and analysis, this is a revision (by Engels) of the translation, by Marx's daughter Laura Lafargue, which had first appeared in "Le Socialiste" (29 August through 7 November 1885). It constitutes the monumental first independent publication in French of Marx's and Engels's groundbreaking work of communist propaganda, "undoubtedly the most widespread, the most international production of all Socialist literature, the common platform acknowledged by millions of working men from Siberia to California" (Preface to the 1888 edition).

From the collection of the Italian Marxist theoretician Antonio Labriola (1843-1904); later in the library of Luigi dal Pane, with his label on the first page. 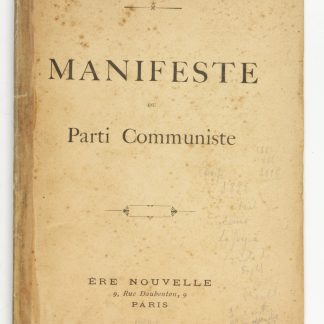