The astronomy, astrology and allied sciences of the Arabs, Persians and Turks

Folio (213 x 330 mm). (9) pp. of text with an engraved headpiece, (27) pp. of engraved astrological charts, 80 pp. of text with 4 engravings in the text. Title-page printed in red and black. Contemporary unsophisticated boards. 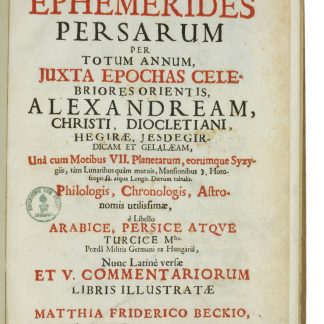