8vo. (8), 247, (1) ff. With woodcut printer's device on title-page, repeated on recto of final leaf. Contemporary limp vellum with traces of ties and remannts of a handwritten spine title.

The twelve books on medicine by Alexander of Tralles, the first parasitologist in medical history (and the younger brother of Anthemius, architect of the Hagia Sophia), issued together with al-Razi's classic treatise on smallpox and measles ("Kitab fi al-Jadari wa al-Hasaba"): the first book ever published on smallpox, also known as "Peri loimikes" or "De pestilentia".

Indeed, Al-Razi was the first physician in the history of medicine to distinguish between smallpox and measles, and consider them as two different diseases. The influence of his diagnostic concepts on Muslim medicine was very clear, especially on Ibn Sina. This work gained great popularity in Europe and was also translated into French, English and German; Brockelmann states it saw some 40 Latin editions between 1498 and 1866. 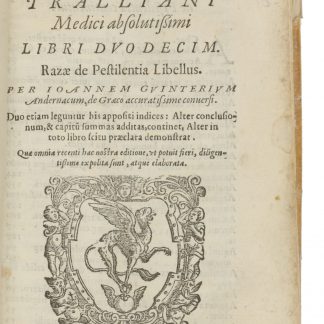