Exquisitely produced work on falconry and horse riding, with many coloured illustrations

Very rare, limited first and only edition of an exquisitely produced work on falconry and equestrian sports, a showpiece of Dutch art nouveau book illustration. The first volume, on falconry, contains reproductions of the plates from Schlegel and Wulvenhorst's "Traité de fauconnerie" (1844-53), "the finest work on falconry which has ever been produced" (Harting), and opens with a section devoted to the Dutch Prince Alexander van Oranje-Nassau (1818-48), president of the Royal Hawking Club, and ends with a list of terms together with their translation into English, French and German. The second volume treats the equestrian sports in the Netherlands, England, France, Germany and Belgium, with illustrations of races and hunts. Much of the information derived from previously unpublished sources concerning the Dutch Royal family and their horse- and falconry related activities.

It is a separately published follow-up to the ten volume set Het historisch museum van het Korps Rijdende Artillerie (1898-1904), that was published to celebrate the 100th anniversary of the Dutch Horse Artillery Corps (The Yellow Riders). The complete series ranks "among the most beautiful military publications in the world" (Sloos).

The book was financed and privately published in a limited number by Nicolaas Jan Adriaan Pieter Helenus van Es (1847-1921), Captain of the Dutch Horse Artillery Corps and amateur painter. He was assisted artistically by Jan Hoynck van Papendrecht (1858-1933), Hendrik Maarten Krabbé (1868-1931), Willem Constantijn Staring (1847-1916). The first was famed for his military art.

With a presentation inscription from the author to Colonel Harhoff dated 1913, in each volume, and with library stamps of the Royal Garrison Library Copenhagen ("Det Kgl. Garnisons Bibliothek i Kiøbenhavn" and "Artillerie bibliothek"). Bindings only slightly scuffed at the foot of the spine, otherwise in very good condition. 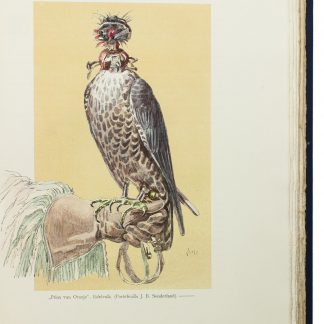