Including a manuscript leaf by Burton

[Arabian Nights]. Burton, Richard Francis. The Book of the Thousand Nights and a Night. A Plain and Literal Translation of the Arabian Nights Entertainments.

The present edition (limited to 99 sets, the present being copy no. 49) includes a manuscript leaf from a text by Burton. In the present copy this is a book review by Burton, of a French translation of Johannis de Capua's Latin translation of a Hebrew translation of the Panchatantra, a Sanskrit frame story written several centuries before the Arabian nights. The notes at the head show that it was used as printer's copy.

The title-page of volume one uses the correct main title, The book of the thousand nights and a night, but confusingly mixes it with part of the subtitle of the Supplemental nights: "to the book of the thousand one nights with notes anthropological and explanatory". To add further confusion it says "volume three", though the content is that of volume one. The volume number is clearly a printer's error, apparently corrected early in the press run.

Ross dates the (regular copies of the) present edition ca. 1940. This later date is supported by the fact that this edition is not included in Penzer's thorough bibliography published in 1923.

Some minor browning to the endpapers, those of the first volume partly detached and with a small pieces torn off, the binding has some very minor wear to the hinges, and a few headbands have been carefully repaired. A fine set. 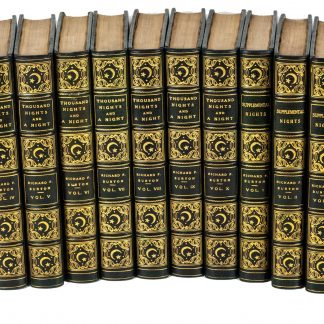