Manuscript compilation on Arabia and its vicinity with 39 pages of illustrations, especially inscriptions, but including views of the Great Mosques at Mecca and Medina

Folio (29 x 22 cm). 63, (10) ff. Manuscript in Dutch, written in ink on paper, with two loosely inserted supplements (2 bifolia), with a calligraphic title-page (in script lettering with an interior white line giving an incised effect) and 39 pages of (mostly) ink and grey ink wash drawings of inscriptions, musical instruments, buildings, etc., including 3 pages of Kufic inscriptions in black ink with vowel points in red and decorations in red, yellow and green, and a few other written inscriptions showing the styles of script, plus a small drawing of an inscription and a few written examples in the text. Contemporary half canvas, sides covered with printed pattern paper (a matrix of 4-petalled rosettes on a background of horizontal and vertical lines, and dots, in red, blue and yellow, sewn on 3 vellum tapes and tacketted to the canvas spine through a vellum liner.

A Dutch illustrated manuscript devoted to the Arabian Peninsula and neighbouring regions, compiled in 1785 by (and the illustrations drawn by) Johan Louis Gerlagh (1735-98), a director of the Dutch West India Company and East India Company (WIC and VOC). He takes a special interest in the various and styles of script, including Egyptian hieroglyphs and at least six styles of Arabic script (kufic, naskh, ta'liq, thuluth, ruq'ah and maghribi), but he also discusses and illustrates bas-reliefs, buildings (including the Great Mosques at Mecca and Medina), musical instruments, footware, a scarab, etc., and provides tables of data concerning tides, compass corrections and temperatures, and accounts of the Islamic calendar, precious stones, weights and measures and coins. The title describes the manuscript as notes from Carsten Niebuhr's "Reize naar Arabië en andere omliggende landen", a Dutch translation (Amsterdam & Utrecht 1776-78) of the German "Reisebeschreibung nach Arabien" (Copenhagen 1774-78), but Gerlagh apparently treats Niebuhr's complementary "Beschryving van Arabie" (1774, first published in German in 1772) as an additional volume of the Reize. All the illustrations and most of the text are copied from these two publications. Gerlagh does make use of other sources, however, quoting from Bernhard von Breidenbach's "Peregrinatio in Terra Sanctum" (1486); Heinrich Buenting's "Itinerarium scripturae" (1581); Fredrik Hasselquist's "Travels in the Levant" (1766); J. F. Martinet's "Historie der waereld" (1780-87), and Joseph de la Porte's "Nieuwe reisiger, beschryving van de oude en nieuwe weereldt" (1766-91).

Gerlagh came from a patrician family that had ties with the WIC by at least 1720 (including a director by 1730) and the VOC by at least 1735. He himself was a director of both by 1764. Although he is recorded moving from Tholen to Oosterhout (northeast of Breda) in 1779, this may have been a second residence, for he had already set up in Hoeven (west of Breda) where he served as "schout" (head of the municipality) from 1771 to 1794, his wife died there in 1786 and he died there in 1798, so he probably produced the present manuscript there. His amateur drawings and sketchbooks, most of them in Museum Gouda, have been exhibited.

The manuscript is internally in good condition, with most deckles preserved. Binding worn but professionally restored. A good example of the fascination of leading figures in the VOC and WIC with the Arabian Peninsula and vicinity and with Islamic culture. 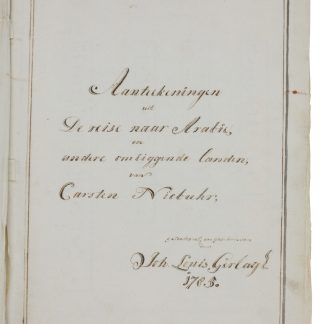